I wound up leaving Randy’s at around 7am, getting home at 8am, and waking up at 2pm. This isn’t the weirdest schedule I’ve slipped into but it was a bit stranger than I wanted. I spent the afternoon and evening walking on my treadmill and catching up on miscellaneous things until I got bored around 9pm.

I still had a lot of cakes and wanted social engagement so I called Stomping Grounds Games and offered to trade them cakes for the right to steal an arbitrary number of sodas and waters from them when I visited. They accepted by terms and the 10 or so people at the store ate their fill of my baked bounty. Someone recommended I sell what I made, a suggestion at which I scoffed, but I thought about it and thought it’d be fair to offer a cake as a prize for a Magic tournament and shortly thereafter the Stomping Grounds Diabetes Open was born. Right now the top prize is a peanut butter brownie mousse pie and top 8 gets creme brûlée. I’m curious to see how it develops.

Randy Booz turns… something in a week or so and I need to make him a large quantity of cakes because of a promise made while running a half-marathon. Long story short, Randy doesn’t often reply to text messages, I said that if he replied to the string I had sent him I’d bake him a cake for each, I had issued nine messages at that point, thus nine cakes.

To prepare, I purchased 36 eggs, 6 lbs of cream cheese, 10 lbs of sugar, 10 lbs of flour, a pint of vanilla, 8 lbs of various fruits, 2 lbs of cookies and 38 oz of pepperoni. Why the pepperoni? Because before I started making nine of the tastiest cakes of my life I was sure as heck going back to a low-carb diet.

My mother wanted to know what I wanted for Christmas.  I asked for a 1/2 sheet pan-sized sealable carrier to which she responded “I love those”.  My mother doesn’t bake and I don’t think she has used a 1/2 sheet pan since a failed 5th grade attempt to bring in sugar cookies for a Christmas party.

My father went to her house to drop something off and I had him do some recon.  So instead of this: 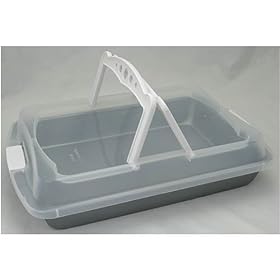 Well at least I can make bundt cakes appropriate for Vikings.