The New York Botanical Garden train show is the highlight of that institution’s winter season. Â Their main greenhouse is outfitted with several train displays and reconstructions of NYC landmarks. Â The exhibit is quite popular and even though we arrived at opening, we had to wait 3 hours for an available slot. Â In the meantime, Tee Jay and I went through the rest of the Gardens.

Most of the Gardens were somewhat barren but the larger elements still came out. 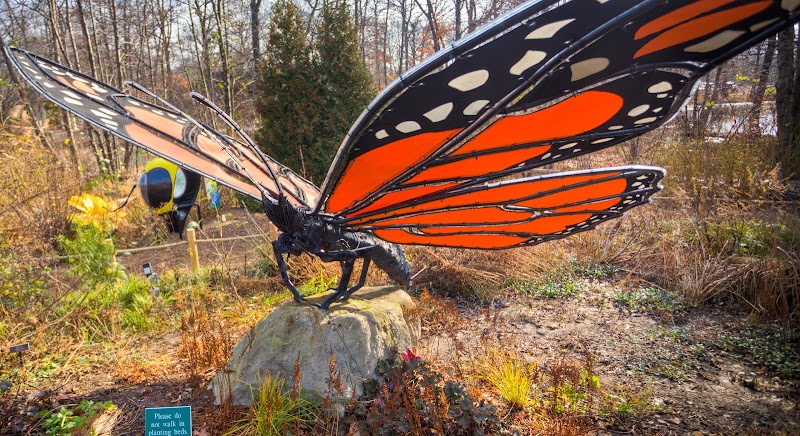 This was a large butterfly in the Children’s Garden. Â Around this butterfly were showcases about how plants and animals interact in that delightful prose marking children’s education. Â Plants aren’t eaten they’re “consumed” and deer don’t shit out seeds they “transport them”.

The indoor part of the exhibit had binocular microscopes. Â Fact: everything looks cool under a 50x binocular microscope. Â Teejay and I spent 20 minutes or so hogging them as we just looked at stuff we had on us. Â Here, Teejay is absorbed with how dirty his glasses are: 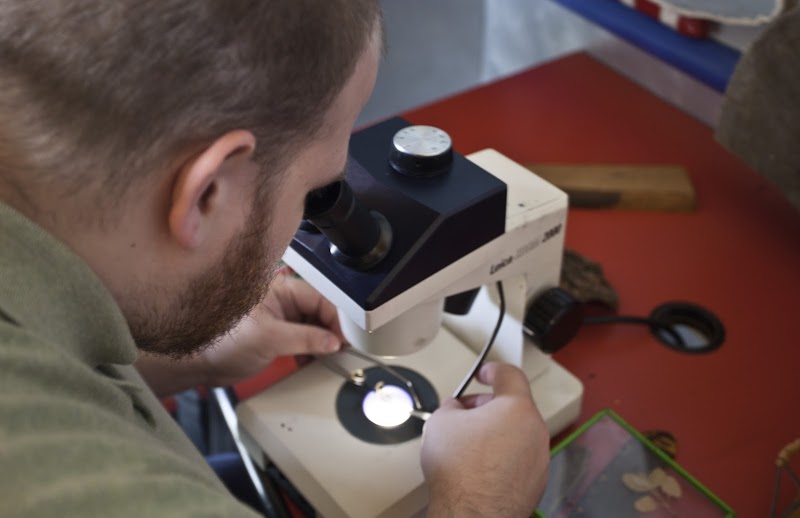 We still had some time to kill and walked the periphery of the east end of the Gardens. Â This boulevard was lined with trees decorated by public school classes and the differences between them were stark. 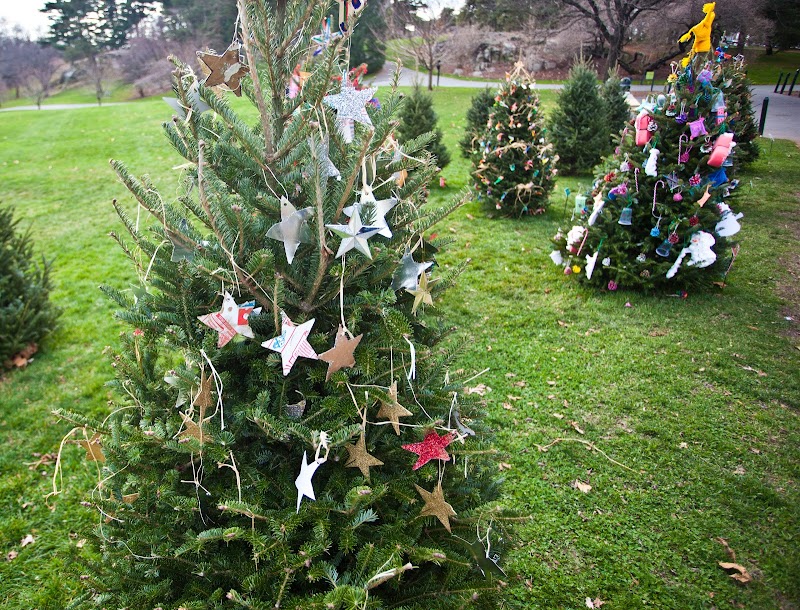 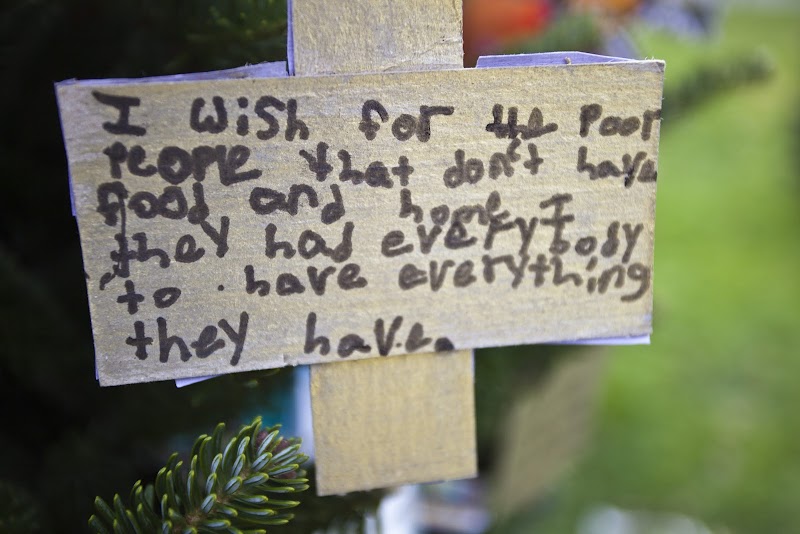 Heart in the Right Place

We made our way to the Haupt Conservatory which had an enclosed staging area with a train theme. Â There was a conductor on stilts who had a watch that showed the season instead of the hour. Â Periodically she’d yell things like “all aboard, it’s almost 10 of spring!” I wish I could summon such whimsy on command. 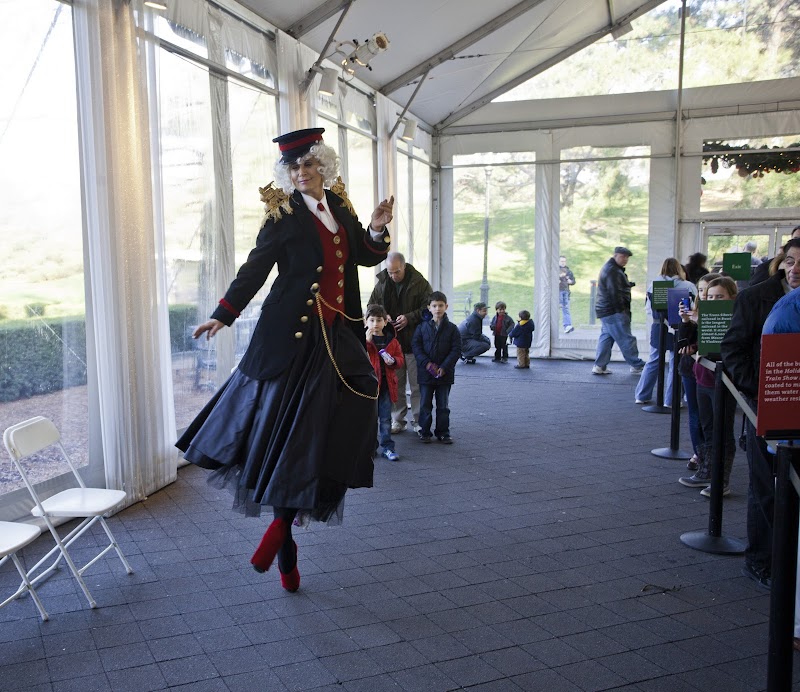 I had seen a few macro shots of the event but the expanse was impressive. 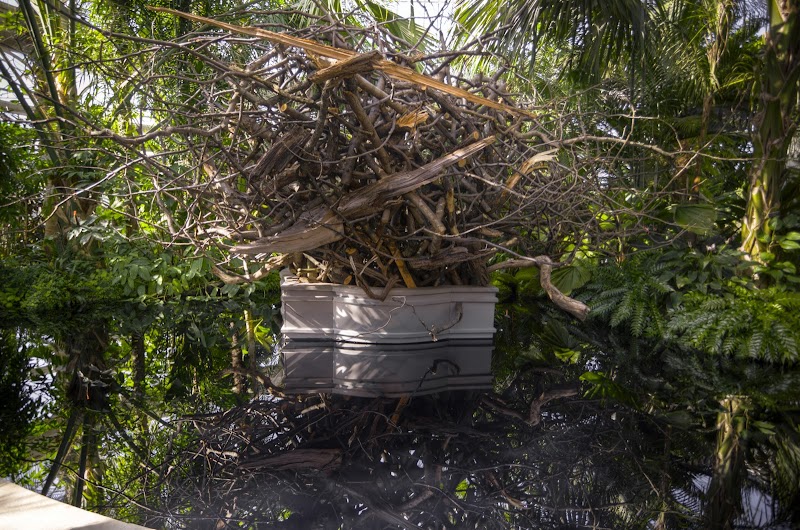 Was transformed to this: 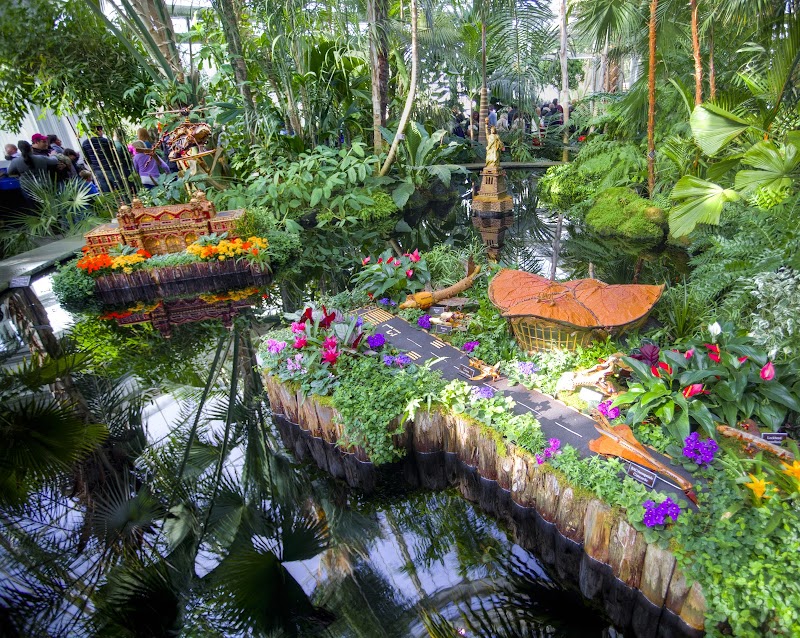 Suspended to the left is something Tee Jay called the “ewok copter” or “wookiee copter”. Â I laughed far too loudly at this. Â Here it is in detail.

All of the constructs were made of natural materials like twigs, bark, needles, boughs, berries, nuts, and roots. Â The cathedral of St. John the Divine was almost five feet tall. 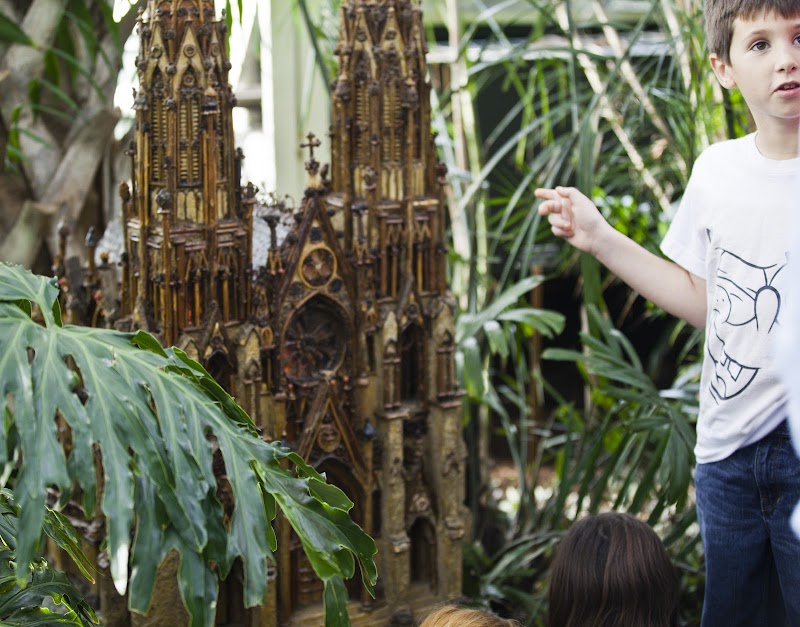 Before going to a venue, I try to determine three to five shots I want. Â One was a low angle shot of a train with a distinction sense of “rushing” to it. Â Tee Jay politely suffered through my numerous attempts at getting this in several parts. Â I forgot my basics and failed to consider using shutter priority to catch movement and instead got mediocre shots like this with no sense of motion: 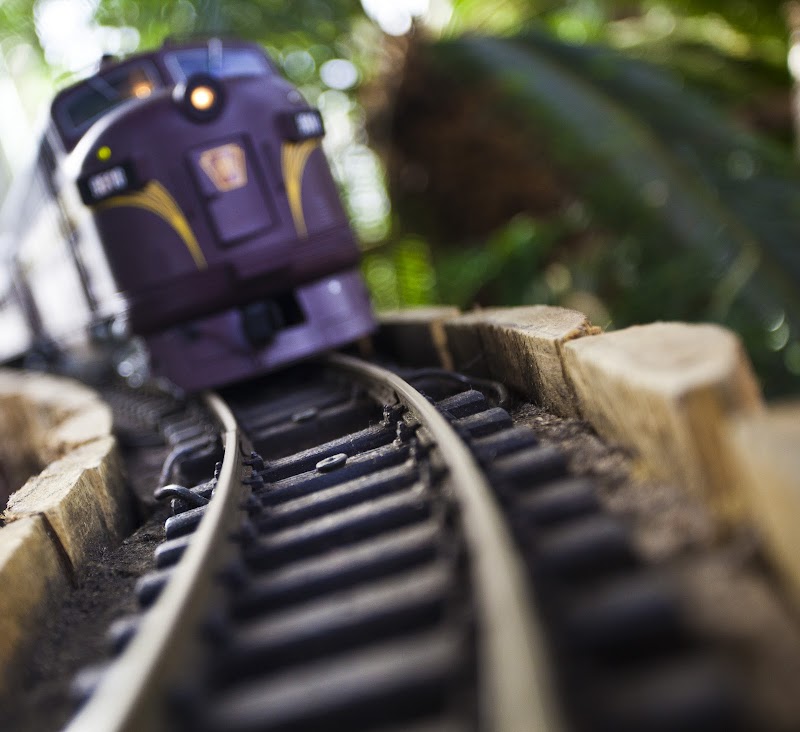 Only Â later did I accidentally get what I wanted but without the sense of size: 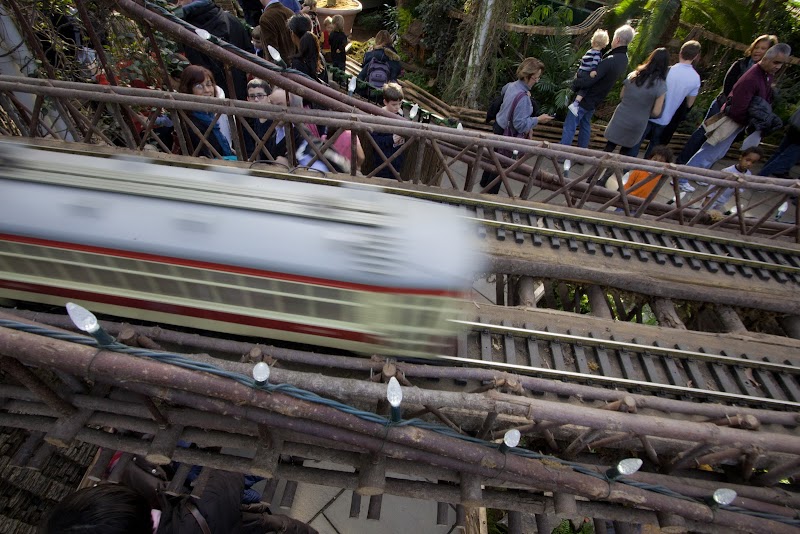 Tee Jay and I were both decked out with nice cameras and I had my pocket notebook and we were asked by event staff if we were press. Â We said no, but I’m curious what would have happened if I had answered otherwise.

One technique I used during the day was holding up my camera on my monopod with a wide angle lens on it. Â The changed perspective made up for my other photographic shortcomings. 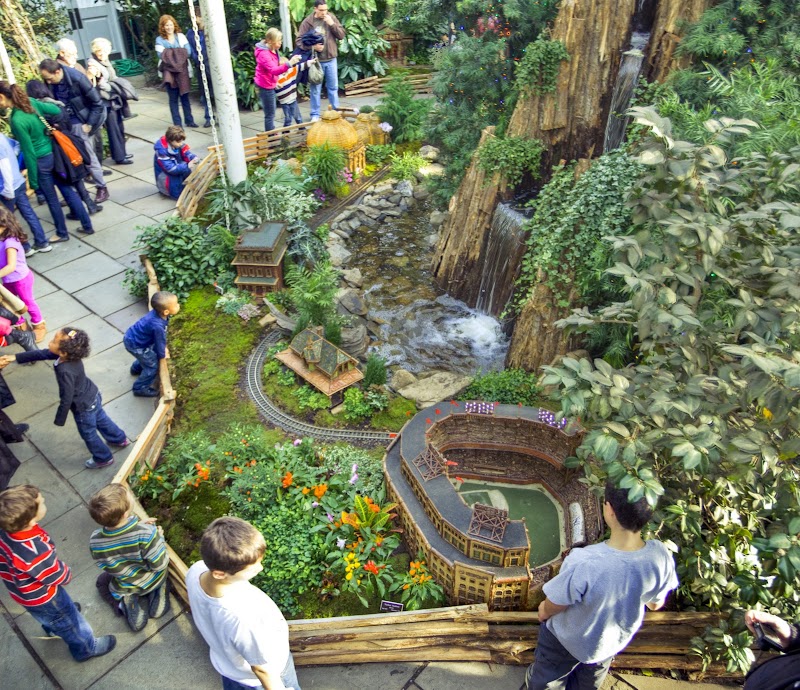 Sadly, the lights on Yankee Stadium are not trapped fireflies.

The exhibits were a parade of beauty and detail set in idyllic surroundings. Â I’ve rarely photographed something I’d call calming and even the frenetic pace of the trains didn’t break the tranquility. Â There was very little shoving and all the children were well-behaved. 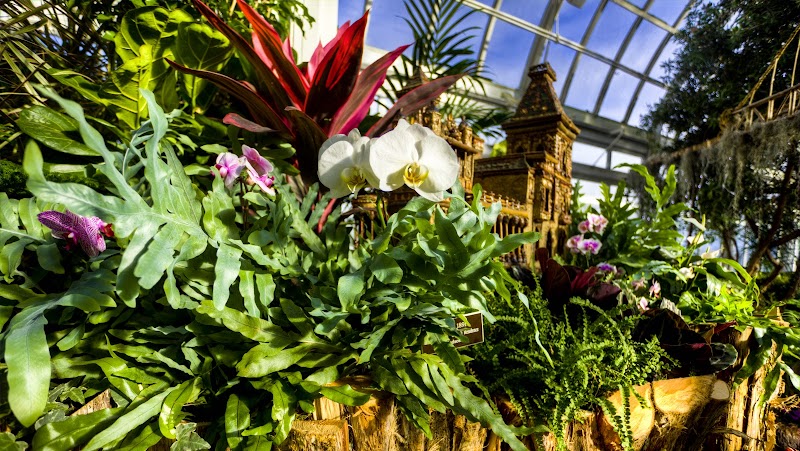 Tee Jay and I spent a good bit of time during the day failing to take shots and sharing our photographic inadequacies. Â I hope to do it again sometime, maybe when the lily pond returns.