Chris: Do you like hiking?
Me: Yes, slowly.
Chris: That’ll work.

Today we hiked the New River Gorge trail in the heart-ish of West Virginia.Â  Considering its shape, history, and denizens, I’m not sure if West Virginia can be said to have a heart but we were going to go into it.Â  The trail head was about an hour from Chris and Christine’s and took us through prime Deliverance territory with many car-sickness-inducing turns.Â  I am familiar with the dilapidation of PA’s failed coal and steel towns, I am intimate with the idea of a left behind hovel, and I find beauty in the Americana of an area that time has moved past but West Virginia was altogether different.Â  PA has rust, oh god does it have rust but it is a polished rust.Â  A combination of dried gangue and insistence wears away the corners of formerly proud industry into dignified relics of an era where an industrial romantic would say a region sacrificed itself to make America great.Â  Bethlehem understands that it will never be what it was and US Steel doesn’t shit itself about its prospects for tomorrow.Â  West Virginia is angry about it.Â  The rust is pointy and comes with a sense of entitlement of “we were supposed to have it great”.Â  Buildings are empty in a haphazard way compared to Austin Dam or Centralia’s more clumped abandonment.Â  PA’s decay is brown with a hint of red, West Virginia’s is a menacing red with a hint of brown.

The supply of cookies I made had been picked away and Jon had a good luck cigarette at the head of the trail.Â  The trail itself was well-made, probably one of the 8th Wonder Trails forged by the Civilian Conservation Corps during the halcyon days of Roosevelt’s Alphabet Soup.Â  Conifers and man-eating rhododendrons lined most of the trail except in places were it was simply a field of dun-color deciduous trunks. 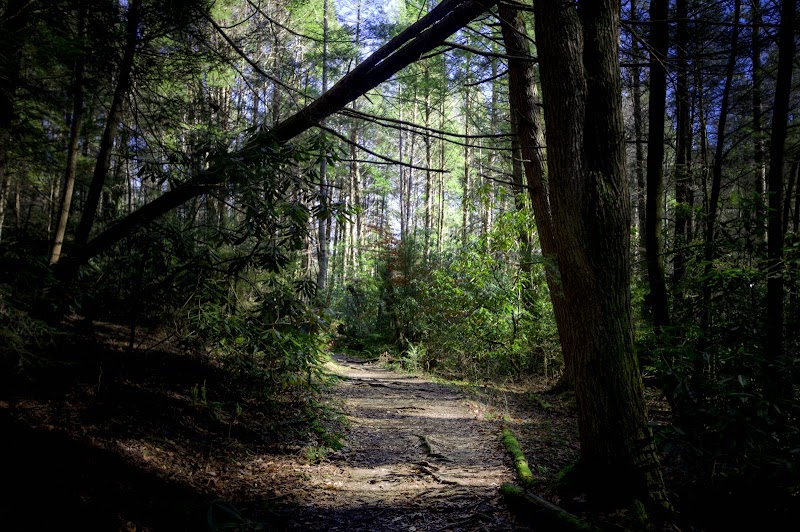 A Path in the Woods

Luckily, this is a problem solvable with HDR.

At the apex, if the several hundred foot summit can be called such, we stared at haze and wreck fall had made of nature. 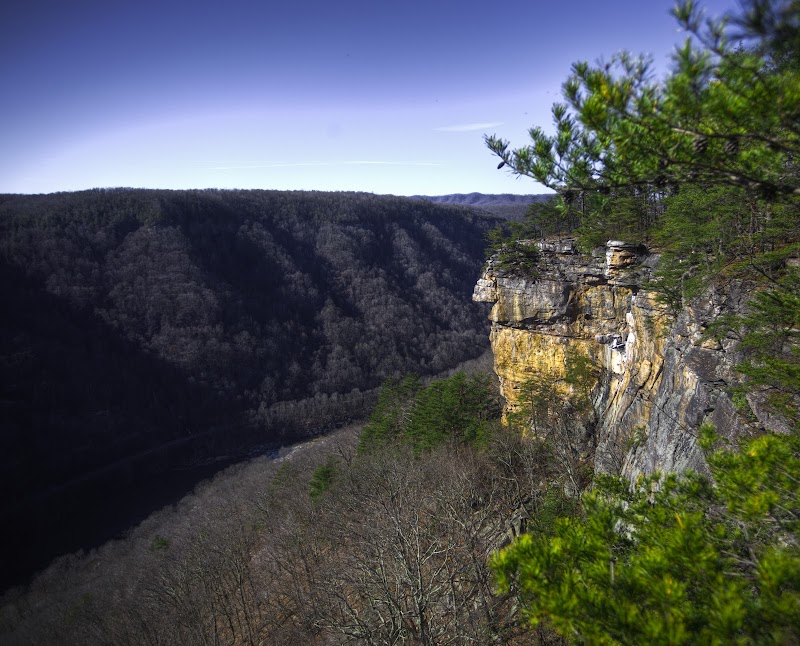 We walked a bit more and poked our heads out at each new “peak” on the trail showing some new twist to the New River.Â  After a bit, they all looked like this to me: 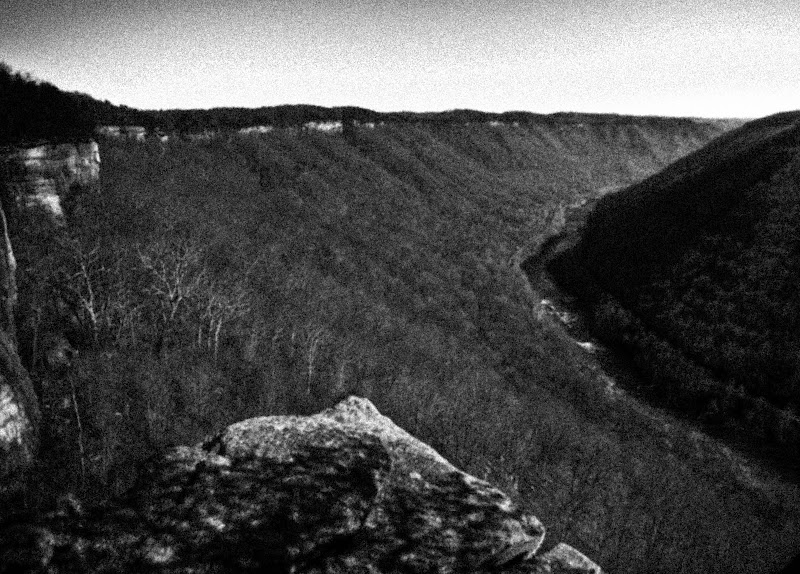 I imagine this is what the valley looked like before Ted Turner colorized it. 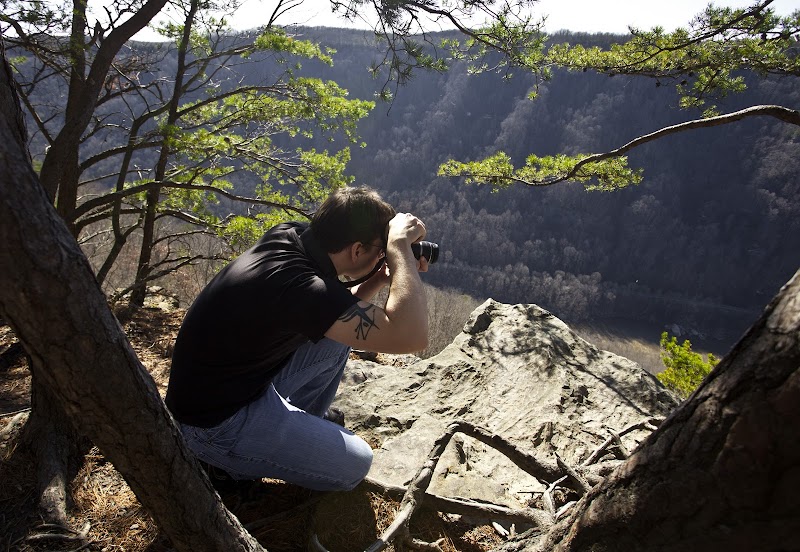 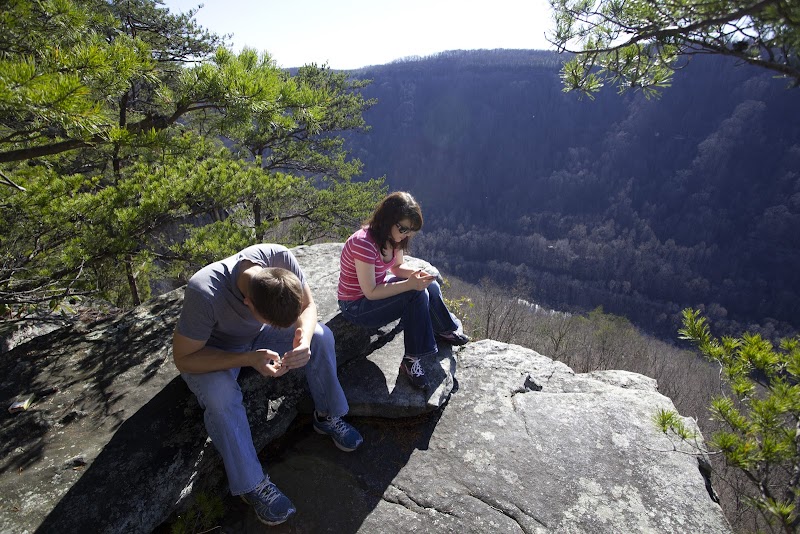 After the underwhelming stroll we had a much more compelling lunch of pizza with Gorgonzola cheese, chicken, and pesto, followed by presentable butter toffee ice cream.Â  This was my first exposure to Charleston, WV “the Northern-most Southern town” and wish not destroy the placidity of its quaintness.Â  There was a book store with expensive art next to a pizza joint and an organic ice cream bar with crappy pictures on the wall.Â  The capital of The Land Time Forgot appears to be a New England liberal arts college town.Â  Yes, I know it’s much larger, but I prefer to preserve it as the 2 block x 1 block area I saw.

That evening, the urge to host was displayed by Christine’s interest in board games which Jon took as his cue to go running.Â  I offered to show Christine how to make hazelnut coffee truffles and after a trip to Wal-mart’s circus of bruised souls/fruits we began making them as The Tempest played on TV.Â  “Let’s make truffles” turned into “I’ll make truffles” and we cleansed shitty zipper-ridden Shakespeare from our pallets by watching Top Gear.Â  I hope they too stand the test of time.